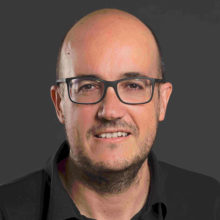 Albert Bifet works in performing data analysis and artificial intelligence in Big Data and IoT. He joined Télécom Paris as a Professor in September 2015 and works at the LTCI Lab doing research on data stream mining in real-time.

Together with his team of four students, two postdocs and three interns, he focuses on real-time machine learning. His research is both innovative and challenging: standard machine -learning techniques use data that is already stored and static, which is very resource intensive. Real-time machine learning needs to be efficient, using fewer resources and adaptive to the changes on the data. This is very important in several application fields, such as predictive maintenance, or the analysis and recognition of the warning signs of equipment failures. A well-established, collaborative research relationship exists between the researcher and EDF, Orange, Telefonica and Huawei.

He contributes to the development of the Massive Online Analysis (MOA), an open-source software started in New Zealand. This is the most downloaded software for real-time data analysis, and Albert Bifet continues co-leading it and using it in his current research. He has also contributed to the development of SAMOA, at Yahoo Labs in Barcelona. Apache SAMOA is a big-data open-source software, designed for real-time distributed machine learning. It operates on computer clusters based on Hadoop.

Developing methods to classify adaptive data streams has been another important contribution from him, since 2004.