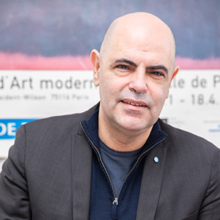 Bertrand David joined Télécom Paris in 2001 as an LTCI Professor in the ADASP group. The major part of his work deals with audio signal processing and Music Information Retrieval (MIR), be that automatic transcription (recovering the score from the music signals), sound representation or musical acoustics.

He has for instance supervised two doctoral theses on rhythm detection: one aiming to teach a computer how to give the “beat” and the other, more recently, aiming to infer high-level properties such as the positioning of the bar lines. His more recent work focuses on developing algorithmic methods to improve speech intelligibility in a noisy environment, such as a vehicle interior. These methods seek to imitate a natural modification, which is a reflex of the human voice produced in such conditions, called the “Lombard effect”.

His research on musical acoustics forms part of his work to support instrument making. In order to decode the complex mechanism of string instruments, Bertrand David focuses on developing algorithms that estimate the modal properties of vibrating structure and thus define the parameters that summarize acoustic behavior. The dimensions are formatted and their measurement is made accessible to instrument makers via an online Aid to Instrument Makers Platform (French acronym : PAFI), which has been developed in partnership with Itemm (Institut technologique européen des métiers de la musique) in Le Mans and Université du Maine’s Acoustics Laboratory, who is leading the project. The application’s goal is to bring together instrument makers so as to share and disseminate knowledge and measurements.

© Photo and illustrations – All rights reserved