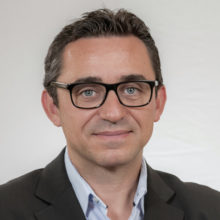 Frédéric Grillot joined Télécom Paris in October 2012 as an Associate Professor at LTCI and became a full Professor in January 2017. His research work deals with photonics, optoelectronics and semiconductor lasers, with applications mainly in communications and defense.. 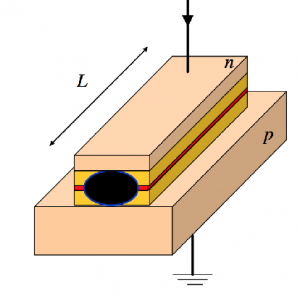 Photonics is the science and technology of light, representing an annual global market of close to 450 billion euros (according to Phototonics21 and VDMA), which Frédéric Grillot had showcased in 2015, as part of the International Year of Light organized at Télécom Paris. The aim is to revolutionize people’s daily life by using photons, as these packets of energy travel at the speed of light and enable spectacular increases in computing and data processing power to be achieved. In this context, Frédéric Grillot has been recently conducting his research, together with Professor John Bowers at the University of California, Santa Barbara (UCSB). Their project focuses on the development of new semiconductor lasers epitaxially grown onto silicon. The gain medium incorporates quantum dot solutions allowing the laser to exhibit very low power consumption and high insensitivity to parasitic reflections coming from the system environment and affecting the laser stability.

These novel properties are likely to be of interest to major industry players such as Intel, HP, IBM, Google and Facebook. Indeed, silicon being a cheap material, those novel optical solutions compatible with standard CMOS process technology can be implemented in future photonics-integrated circuits, which will be fitted into tomorrow’s smart phones and high performance computing. In a similar vein, the researcher has also filed a patent application, with Professor Marek Osinski from the University of New Mexico, on a new concept of tunable silicon-based laser, which enables optical routing to be carried out on a larger scale.

Another activity relates to atmospheric communications, where air is used as the physical support for the propagation of information instead of optical fibers, of which we know that their bandwidth is already overloaded. Part of Frédéric Grillot’s research relates to a French Directorate General of Armament project, together with MirSense, Thales Alenia Space, and Nokia. Its aim is to develop atmospheric communication using secret keys operating in the mid-infrared range. Information transmission will be achieved by coding the message in a chaotic signal emitted by a quantum cascade laser. Chaos is a form of rich oscillation that is intrinsic to lasers, the latter often being subject to spatial or temporal instability. Chaos communication is a proven technology in the near infrared range (telecoms) but has not been applied to date in the mid-infrared range. The researcher and his team have shown that chaos can be generated by quantum cascade sources (Article Jumpertz et al., Nature Light, 2016). Together with the University of California, Los Angeles, they are now tackling the problem of controlling it better in by studying its behavior over temperature and under modulation. The technology’s applications could establish secure and stealthy communications in locations devoid of any infrastructure. If the system is sufficiently compact and energy-efficient, its deployment in various ground-based or airborne units could be envisaged, so as to set up a secure communication network.