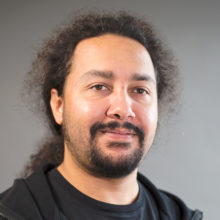 Tamy Boubekeur has been a Researcher and Professor at Télécom Paris since 2008 in the LTCI laboratory. He specializes in 3D computer graphics, in other words the representation, design and simulation of real and imaginary 3D objects and scenes.

He works with the IMAGES group of which he is a member. His main areas of research are geometric modeling and image synthesis, which cut across various disciplines, a hallmark of the IMAGES team. Applications are to be found in medical imaging, radar imaging and video games.

Prof. Boubekeur and his Ph.D. student Malik Boughida have recently developed a method for photorealistic synthesis. This is now being used by Ubisoft Motion Picture, to produce the animated series  of Rabbids Invasion for instance. The technology consists in image synthesis for long simulation processes. It predicts the color of a pixel based on the first simulation iterations, by replacing a large part of the simulation with subsequent image processing. The source code for the technology, which has been published in open-source, is very easy to incorporate. Open-source rendering engines Appleseed and LUX Render also use it. The research has been summarized in “Bayesian Collaborative Denoising for Monte Carlo Rendering”, an article published in Computer Graphics Forum and also presented at the EGSR 2017 international conference. Other projects on the same topic were carried out with Dassault Systèmes for its future real-time rendering systems. This project is one element of the group’s overall research on image synthesis. It aims to develop methods for extremely fast digital image production based on 3D models.

Prof. Boubekeur’s most recent work covers both design and shape optimization and can be summarized as follows: how can we represent what is around us with a limited number of digital variables? This is a completely different approach to big data and its massive datasets. The geometric simplification of an objects reduces its complexity and reveals its key structures, which ultimately increases the speed of the algorithms using it. This type of method is particularly useful in calculating control structures or superstructures and serves to interact quickly with complex objects (deformation, physical simulation).

In 2017, Prof. Boubekeur and his colleagues received the Best Paper Award at the Shape Modeling International conference for their article: “Unsharp masking geometry improves 3D prints”, co-signed with Philipp Herholz, Sebastian Koch, and Marc Alexa, at TU Berlin, and published in Computer & Graphics. The article describes an algorithm for geometric processing, to improve the final perception of 3D prints. More specifically, the algorithm pre-emptively enhances those elements that may be lost during the printing process. On a screen, 100% of the light bounces off the entire surface of the object whereas in the physical world, the print material used absorbs part of the light. This technique compensates the loss by processing and directly modifying the geometry of a shape, so as to best preserve its details once it is printed.

In 2015, Prof. Boubekeur and his Ph.D. student Emilie Guy worked with Osaka University. They devised a “natural” navigation model in a virtual environment, where there is no terminal to manipulate. The system scans the user’s body with an RGB-D camera and reconstructs a skeleton. The “virtual” camera is then adjusted according to body elements that are identified as being less critical for other interactions (picking up an object, activating a system), such as shoulder position, which leaves hands and head free for other tasks.  The original article was awarded the best article prize at the 2015 IEEE international conference. “Extended LazyNav”: Virtual 3D Ground Navigation for Large Displays and Head-Mounted Displays”, the article published in the IEEE Transactions on Visualization and Computer Graphics journal, extends the scope of the research to virtual reality headsets.

His recent work on 3D mesh rendering from medical data earned him the Best Paper Award at the 2016 Shape Modeling International (SMI), for “Multi-Material Adaptive Volume Remesher”, the article he co-signed with Noura Faraj and Jean-Marc Thiery, published in Computer & Graphics. A 3D object made up of different materials can be represented by a voxel grid. (A “voxel” is a “volumetric pixel”.) Physical simulations generally work on high-quality meshes, based on rendering voxel grids captured for example via MRIs, in the case of medical data. The transition from grid to mesh is however quite difficult, often because of a break in quality and resolution, which requires remeshing. The researchers have developed a remeshing algorithm that is both fast and scalable for large datasets. It renders high-quality meshes in different resolutions and preserves key characteristics of the original mesh.