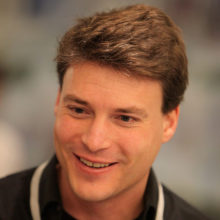 Fabian Suchanek is a full Professor at Télécom Paris, which he joined in 2013. Within the LTCI, his research work is on graphs and more specifically on knowledge bases. He deals with both the automatic construction of knowledge bases and also with data mining in these bases.

Data mining finds patterns; for instance, if a person is married and lives in town X, it is highly likely that their spouse also lives there, etc. Data mining can also find out what the compulsory attributes are for a class of entities (such as a person’s age) and what the optional attributes are (such as a person’s spouse). A research project carried out with Université Paris-Sud, Inra’s Montpellier center and Inria Rennes focuses on key mining. Key mining is a combination of attributes that uniquely identify an entity (for a person, this could be their given name, name and date of birth for instance). The researcher needs to set the relevant “constraints” that will be used to clean up the databases. Fabian Suchanek also works on historical trends, in collaboration with the University of Stockholm: this work helps plot changes in life expectancy across the ages.

Since 2013 and alongside his other work, Fabian Suchanek has mainly continued to develop Yago, the knowledge base he founded. Yago was the result of joint work with the Max Planck Institute and is today one of the largest public knowledge bases created, based on Wikipedia. Its source code was unveiled in 2017, which marked the tenth anniversary of its creation.

The researcher and his team have recently been awarded the 2018 Seoul Test of Time Award by the 27th International World Wide Web Conference. They were also granted the “Prominent Paper Award” in 2017, which each year recognizes the content and impact of an exceptional publication in The Artificial Intelligence Journal. They are now working on a new version of Yago, still with the Max Planck Institute.

In 2016, the researcher worked on how to improve the creativity of computers, in collaboration with Université de Montpellier and Stim, a start-up incubated by ParisTech Entrepreneurs. The idea is for computers to invent concepts and come up with new ideas automatically.

His recent research also includes joint work with Inria and Paris-Saclay on the concept of private knowledge bases. Fabian Suchaneck has in this way contributed to the development of a system enabling all social media data to be collected into a private database.