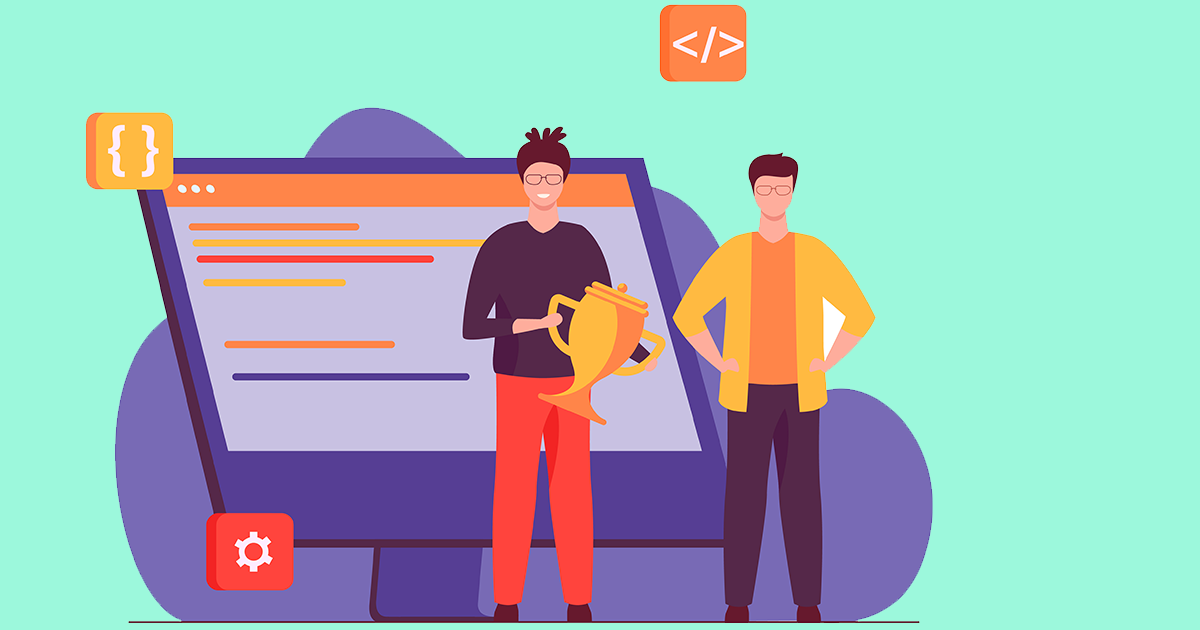 Yohaï-Eliel and Sylvain are the ShapeShifters team that wins ReadyTraderGo, an algorithmic market making competition organised by the firm Optiver in October-November 2021.

Optiver is a market maker. Market making is an activity that consists in continuously offering (“quoting”) both selling (“ask”) and buying (“bid”) quotes for financial instruments.

By ensuring that there is always a buyer and a seller for the products they trade, (read more)

the market maker injects liquidity into the market, allowing investors to transfer part of their risk to them. In return, the market maker is compensated by the difference between the ask and bid price, and possibly through commissions. Many difficulties are inherent to this activity: good estimation of the prices to quote, risk control, speed…

At the beginning of the event, Optiver provided the participants with videos allowing everyone to get acquainted with market making and the specificities of the competition. The competition took place from October 22 to November 22, 2021, an intense month during which each week, participants submitted their code, written in Python or C++, to compete with others in a simulated market environment. At the end of each round, the teams were ranked according to the net profit they achieved, and Optiver made the corresponding simulation histories available to the participants for review, in order for them to improve their code.

They say it best

Sylvain Girard: As I was following the events Optiver offers on a daily basis, I received information about the competition from them. Wanting to learn more about market making, and being excited about doing my first finance competition, I called Yohaï-Eliel within a minute of learning about the rules of the game.

To be honest, before receiving the exchange server’s code, I thought this was a data science competition masquerading as a finance competition. But, as it turns out, it was truly specific to market making.

Yohaï-Eliel Berreby: Sylvain and I have collaborated on a number of competitions, with some sweet successes, including winning the X-SCOR 2021 datathon, winning the WaveGame 2021 (cybersecurity competition organized by WaveStone), ranking 2/68 at this summer’s “Save the World” CTF by Orange…

We have very good team dynamics, and had planned to collaborate again on such a challenge when we could. I had little knowledge of quantitative finance before this competition, so I would essentially have to start from scratch. When Sylvain suggested that I join him, I thought… “Is it reasonable, time-wise? Probably not. But let’s do it anyway!”

How did the competition go… and the road to victory?

Once the competition started, we divided our tasks to approach the problem from different angles: simple heuristics executed with minimal latency, and a more complex model aiming to capture the very-short-term dynamics of the market that was being simulated here, accompanied by custom data visualization tools to efficiently iterate on our submission as the competition progressed.

We were operating under deployment constraints: (read more)

few whitelisted external libraries (Boost in C++; numpy, pandas and scikit-learn in Python). Approaches that would have been very simple to implement without restrictions on the available libraries thus became more complex. We have implemented various strategies, both based on quantitative finance principles, and related to optimizing our specific implementation. From machine learning to using advanced C++ features to rewrite Optiver-provided code, to optimizing Boost.Asio’s Future executors, we explored as much of the available surface as possible to improve our performance, retaining only what our tests showed to be relevant. Our final submission was relatively straightforward, but very effective, with a net profit at the end of the simulation more than twice that of the 2nd best team.

In addition to the satisfaction of a job well done, our victory came with a 30,000 euro prize to share between the two of us.

The WaveGame is a four-event cybersecurity competition, including:

For each of these events, in addition to the background work, we had to produce a report to present our results. Only the first team won a prize: the Télécom Imp’Hackt team won €4800.

Our “serial winners” are participating in other competitions!

Yohaï-Eliel is currently enrolled as a team in the 2nd French national RISC-V competition by Thales (optimization of energy consumption of a CV32A6 soft-core).

Sylvain and a team of classmates are well on their way to winning another algorithmic trading competition, internal to the London School of Economics where he currently attends his 3rd year. They have just been awarded the prize for best algorithm; they still have a presentation to make.

Sylvain should take up one of the recruitment opportunities offered by Optiver, while Yohaï-Eliel wants to continue his path towards a PhD.