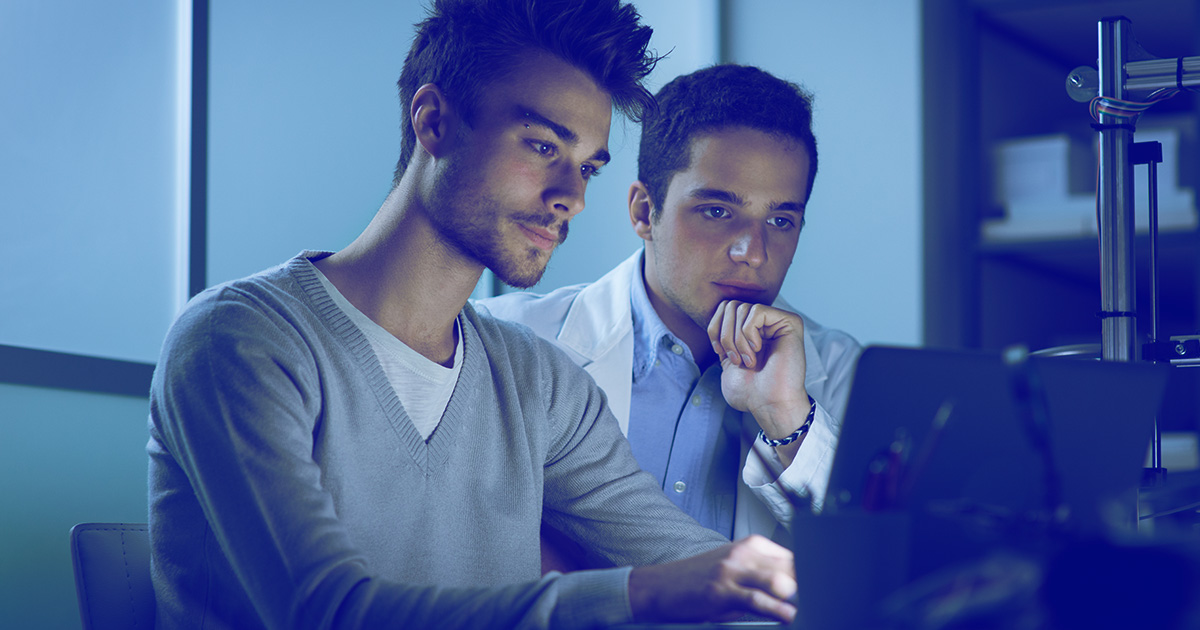 A postdoctoral position, or postdoc, represents a key opportunity for aspiring researchers to broaden their scientific horizons, ‘grow’ and take on new tasks such as teaching and supervision. Two young researchers tell us about being a postdoc in the Télécom Paris Machine Learning for Big Data team.

“A PhD student works on a fairly narrow topic for three years. However, to become a researcher, a postdoc needs to see the big picture, to open up their scientific vision to other fields,” is the first thing Maxime Sangnier says. “The idea is to spend some time in another lab than the one you did your PhD in, so that you can carry on acquiring skills and experience. You can also use that time to show you can work independently to some extent, with other people than your thesis supervisor, in a different context, working on other topics or even in another country.  It’s the perfect time to broaden your scientific horizons,” adds Aurélien Bellet.

The two young researchers held a postdoc position at Télécom Paris, as part of the Machine Learning for Big Data Chair, which was led by Professor Stephan Clémençon from 2013 to 2018. For both of the them, this represented a key moment in their careers, the final stage before securing a research post.

Aurélien Bellet spent one year working mainly on two major research themes. The first was the scaling up of ranking and metric-learning algorithms*, which aim to link up all possible pairs of points in a dataset:  “in practical terms, computing complexity quickly spirals out of control.  However, it has been shown that, from a statistical point of view, loss of information is limited if we work on a sub-sample. Complexity could therefore be reduced drastically, without any impact on the algorithm’s performance.” The other theme of his postdoc was distributed machine learning. In this model, scattered data can be processed without needing to be attached to a central server, with applications for connected objects especially.

* A function which enables the relationship between two elements in a given set to be measured.

For his part, Maxime Sangnier focused on the use of machine learning to predict structured data for a year and a half. “Working on my PhD, I had worked on kernel methods** for audio signal recognition. At Télécom Paris, I continued to use similar tools but this time to predict structured data.   I also learned a lot about statistics, optimization and mathematics generally. My research theme combined continuity with new fields of work.”

A postdoc also introduces new responsibilities: supervising interns in year 2 of their Master’s, jointly supervising PhD students, managing several research projects at the same time and of course, teaching.  “It’s really interesting to start becoming involved in supervision and working with doctoral students. If you’re aiming for an academic career, those are important skills”, says Aurélien Bellet. “Teaching at Master’s level is a challenge, scientifically speaking. And it’s a fine art in continuing education courses. Participants are different, more mature, less technical but they have insight into applications and their work”, adds Maxime Sangnier. “I also learned a lot about how the world of research operates.  During my postdoc, I got to understand how research is carried out in France and how to reach out and engage in discussions in the science community.”

Working in the context of an academic and research chair also offers specific benefits: “It was extremely useful to talk to the chair’s corporate partners. The people we spoke to were scientists who spoke the same language as professors, we could engage with them. They were dealing with fascinating issues, similar to those we come across in academic research, yet sufficiently innovative to contribute to the research,” explains  Maxime Sangnier. “My postdoc at Télécom Paris meant that I could work closely with industry players during technology transfer workshops. I was able to leverage that when I was applying for a post.  You can also build up your network, which can be useful even in an academic job, as we often work with industry partners,” says Aurélien Bellet. “In addition, financial support from partners provides very comfortable working conditions. For instance, it’s important for a researcher to attend international conferences in order to present articles.”

A springboard for a fascinating career

Both researchers agree that their postdoc at Télécom Paris was a decisive step on their career path.  “In terms of personal development, I’ve grown a lot. I’ve moved on from being a young doctor focused on his research topic to becoming a teacher-researcher who is open to other areas”, says  Maxime Sangnier. “ I’ve also made scientific progress, of course. Stephan Clémençon’s Signal, Statistics and Learning (S2A) team is one of the most active in this field in France. Just look at the papers in leading conferences such as ICML, NeurIPS and AISTATS. I’ve increased my skills in all these areas during my postdoc and I’m making good use of them now.”  Maxime Sangnier is currently Associate Professor at Sorbonne Université, in the Probability, Statistics and Modeling Laboratory.  He teaches statistics, mathematics and machine learning, while continuing with his research work. He also jointly heads the “Learning and Algorithms” Master’s program.

Aurélien Bellet’s priority was to obtain a post dedicated to research. He therefore sat several competitive exams and was recruited by Inria, at its center in Lille, only two months after the end of his postdoc.  He works in the Magnet project team, which focuses on machine learning and graphs. More specifically, his research is on distributed learning and privacy. He has kept in close contact with Télécom Paris, where he is a guest Associate Professor and currently jointly supervises a PhD student with Stephan Clémençon. “My postdoc Télécom Paris was a truly productive period, I was able to co-sign a large number of publications. I’m fortunate to still be involved in this collaborative work, which gives rise to very interesting research. “

In 2019, the Data Science and Artificial Intelligence for Digitalized Industry and Services Chair, led by Professor Florence d’Alché-Buc, carried on the work of the Machine Learning for Big Data Chair. The chair continues to explore machine learning and its applications for industry and to train generations of young researchers, such as Master’s interns, PhD students and postdocs.