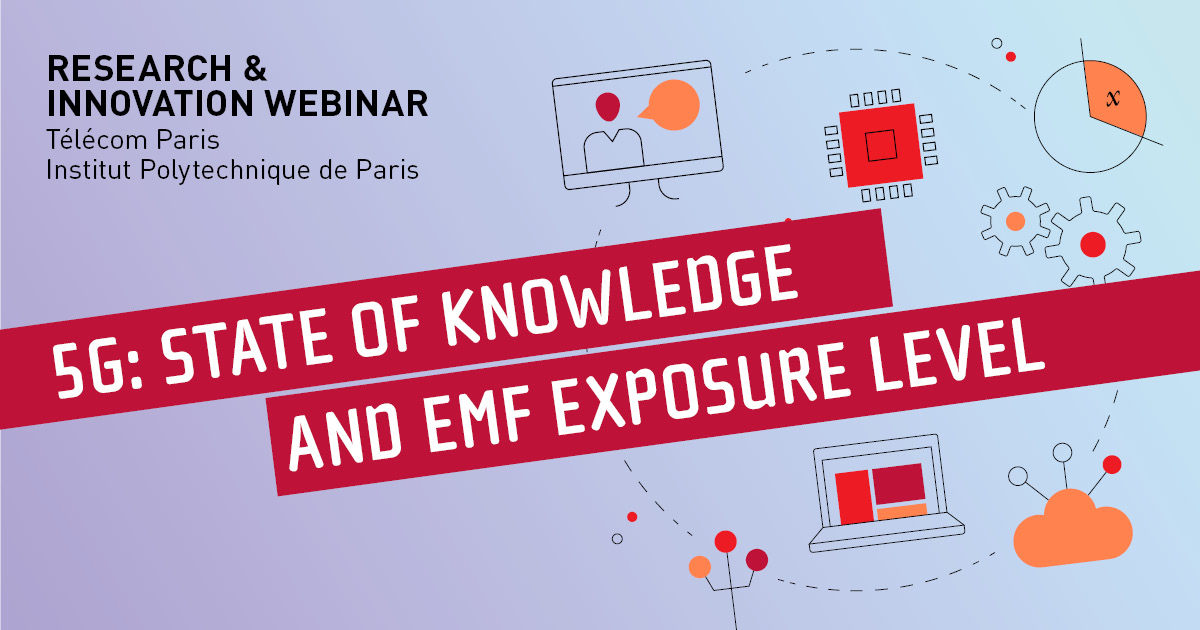 In this webinar, Rodney Croft, Chairman of the International Commission on Non-Ionizing Radiation Protection (ICNIRP) will talk about “ICNIRP, 5G, Guidelines and Health”. His presentation will provide a background to ICNIRP and its radiofrequency EMF guidelines, with a particular focus on issues pertinent to 5G. It will cover this topic both from the perspective of the intention and adequacy of the guidelines to provide protection, as well as through consideration of how the guidelines deal with issues that are commonly raised by anti-5G activists.

Afterwards, Emilie Van Deventere, head of the World Health Organisation’s EMF project, will detail the WHO’s approach to electromagnetic waves and what member countries are doing.

Finally, Joe Wiart, head of the Modeling, Characterization and Control of Electromagnetic Wave Exposure 5C2M) Chair held by Télécom Paris, will talk about issues related to the quantification of exposure to electromagnetic waves and will outline the challenges related to 5G.

Dr Emilie van Deventer is the Team Leader of the Radiation Programme at the World Health Organization which deals with non-ionizing and ionizing radiation topics related to human health. She has been working at WHO since 2000 where she heads the International EMF Project, the Ultraviolet INTERSUN Programme and the International Radon Project. Dr van Deventer received a Ph.D. in Electrical Engineering from the University of Michigan, USA. She was a professor of Electrical and Computer Engineering at the University of Toronto in Canada from 1992 to 2000. Dr van Deventer is a member of the Swedish Radiation Protection Authority (SSM) Independent Group on Electromagnetic Fields. She is the WHO Observer on the Main Commission of the International Commission on Non-Ionizing Radiation Protection (ICNIRP). She is author/co-author of over 50 scientific publications.

Rodney Croft is Chairman of ICNIRP and Professor of Health Psychology at the School of Psychology, University of Wollongong, Australia. He obtained degrees in Philosophy and Psychology before completing his PhD in Psychology at the University of Wollongong in 2000, and then worked in the area of cognitive neuroscience as a postdoc at Imperial College, London, and then at Swinburne University, Australia. His research focuses on the delineation of human brain function, particularly as it relates to agents that might affect it (e.g. electromagnetic fields, illicit and medicinal drugs), as well as psychiatry more generally. He has been involved in research on ELF and RF non-ionising radiation since 2000, primarily utilising the electroencephalogram as a means of observing subtle alterations in brain function. He participates in a variety of national and international scientific and government committees, was Executive Director of the Australian Centre for Radiofrequency Bioeffects Research (2004-2011) and is currently Director of the Australian Centre for Electromagnetic Bioeffects Research. Croft was appointed in 2014 an Associate Editor of the BEMS journal, and joined the ICNIRP Biology Standing Committee in 2008 and Main Commission in 2012. Rodney Croft is the ICNIRP Chair since May 2020.

Joe Wiart, PhD (95), Engineer of Telecommunication (92) is since 2015 the holder of the Chair C2M “ Caractérisation, modélisation et maitrise of the Institut Mines Telecom (http://chairec2m.mines-telecom.fr) at Télécom Paris. Previously he was the head of the research unit of Orange (former France Telecom) in charge of the studies relative to the human exposure to electromagnetic fields. Since 2018 he is the president of « Comité d’orientation de l’observatoire Ondes- Paris de la ville de Paris ». He is also the Chairman of the TC106x of the European Committee for Electrotechnical Standardization (CENELEC) in charge of EMF exposure standards. He is the present Chairman of the International Union of Radio Science (URSI) commission k and has been the Chairman of the French chapter of URSI. He is emeritus member of The Society of Environmental Engineers (SEE) since 2008 and senior member of Institute of Electrical and Electronics Engineers (IEEE) since 2002. His research interests are dosimetry, numerical methods, machine learning and statistic applied in electromagnetism and  dosimetry. His works gave rise to more than 150 publications in journal papers and more than 200 communications.